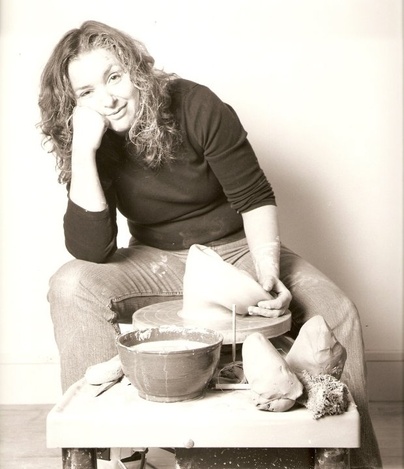 Jacqueline Sandro has been working in ceramics for over 20 years.  She received her Masters of Fine Art from Tyler School of Art in 1993.  Since that time she has taught at several community colleges in the region and Rowan University.  Currently she is the Director of Clay College of Cumberland County College. Located in Millville New Jersey.  In 2003, she was a fellowship recipient from the New Jersey State Council on the Arts.  Her work has been exhibited at the Noyes Museum, and New Jersey State Museum Gallery in Trenton, Rowan University, and the College of New Rochelle.  In 2004 her work was included in the book “500 figures in Clay”, and in 2007 she was presented with the Paul Aiken Award from the South Jersey Cultural Alliance.

In the current body of work I use armor as inspiration for an alternative approach to the figure.  The idea of armor used metaphorically as a person’s exterior and/or reflection of their personality, nature, and internal battles. I have always been interested in figure as narrative, the figure, both male and female, serves as a visual journal for my imagery.  The challenge and intrigue for me is communicating my stories and emotions using surface quality, graphic images, patterns, form, and color.

The pieces are hand built using the slab technique.  Slips, underglazes, terra-sigilatta, and stains are used to paint the piece.  It is then fired to cone 05.  After the first firing I glaze the piece and fire it a second time.  I also used materials that do not need to be fired, such as acrylic paint.